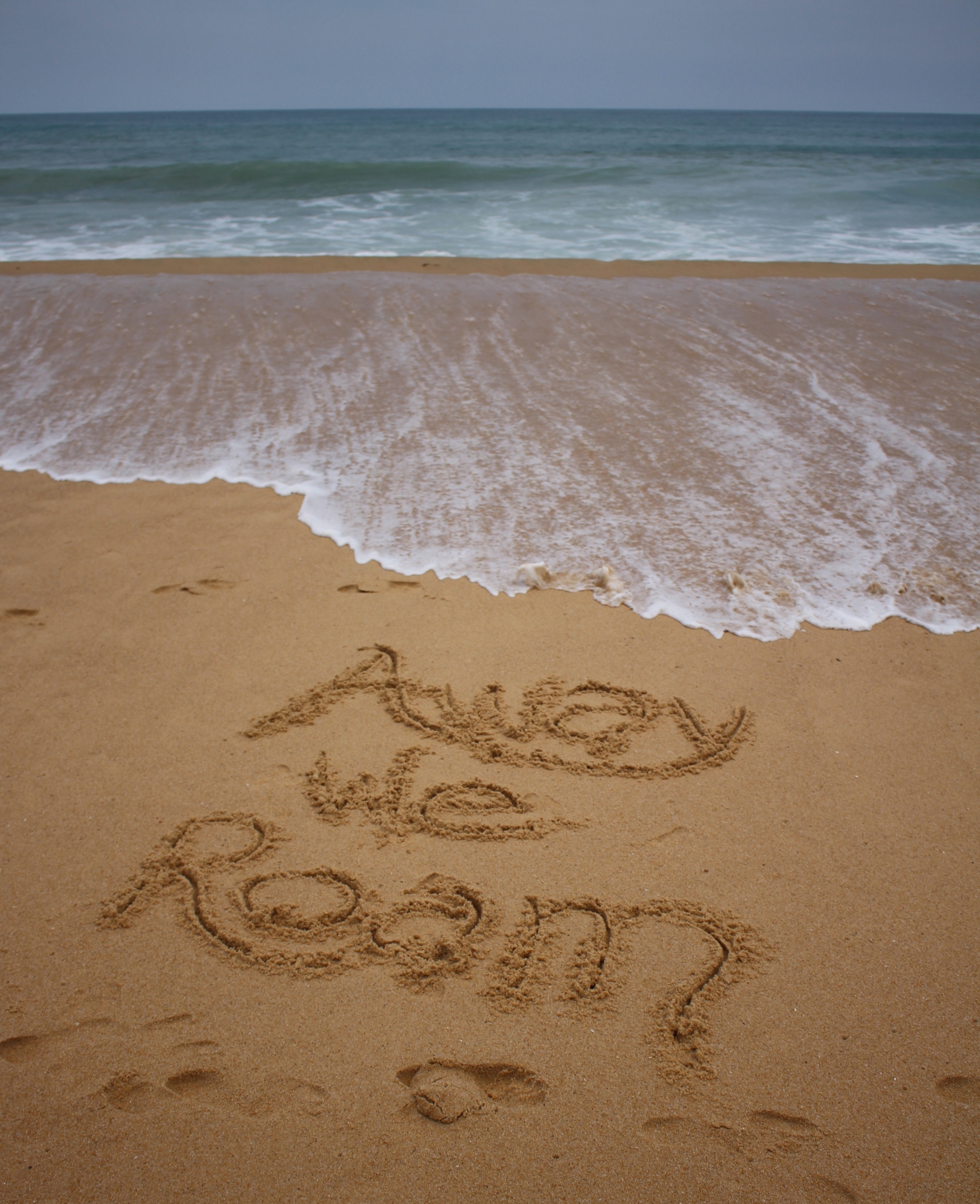 Very seldom do Simon and I indulge in beach bumming. Neither of us like to tan for fun and we aren’t very good swimmers. The thought of laying out on the sand doing absolutely nothing seems mind numbingly boring and uneventful. Despite all these reasons, we found ourselves headed to Phuket, Thailand’s beachy party destination of the south.

Phuket is like most beach vacation spots. Busy streets teem with souvenir shops selling cheesy beach gear while food stalls and fancier eating establishments boast international cuisine in large signage. There are plenty of bars and clubs waiting for sundown to start their nightly business, promising a good time with happy hour deals that no thirsty tourist can resist. 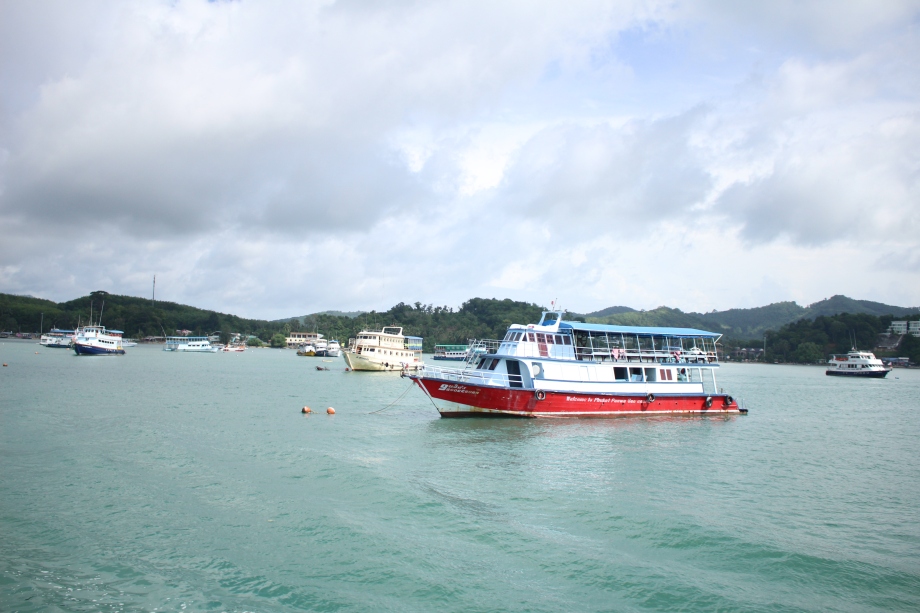 The thought of idle days on the beach motivated us to sign up for a full day of island hopping. Oh yes, Phuket is also tours galore. Despite the threat of thunderstorms in the weather forecast, the trip began with sunny blue skies as we boarded the 50 passenger boat with other excited tourists from all over the world, like Australia, Russia, China, France, United Kingdom, and India. There were families, retirees, and young couples just like us. 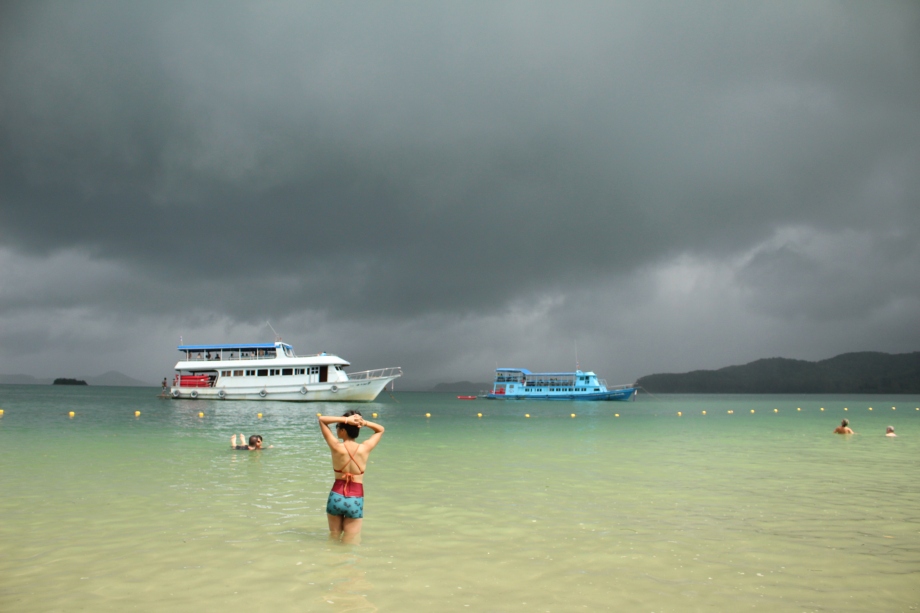 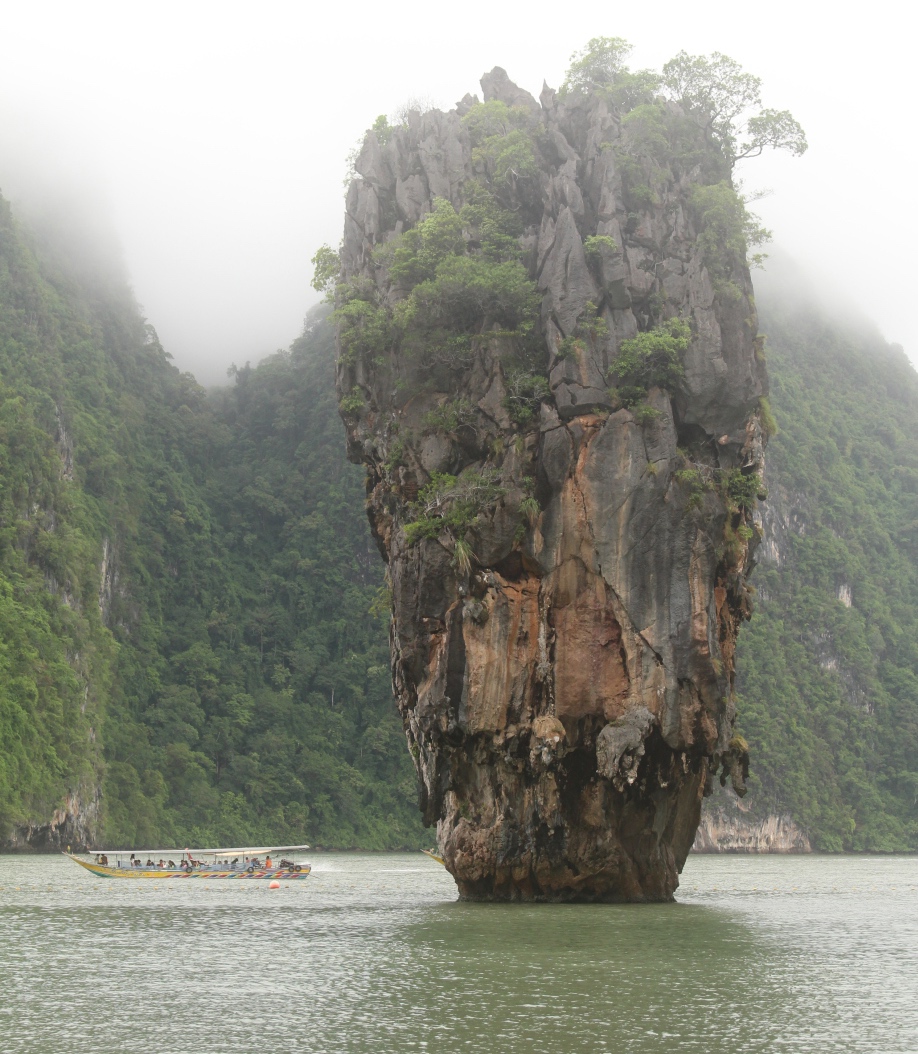 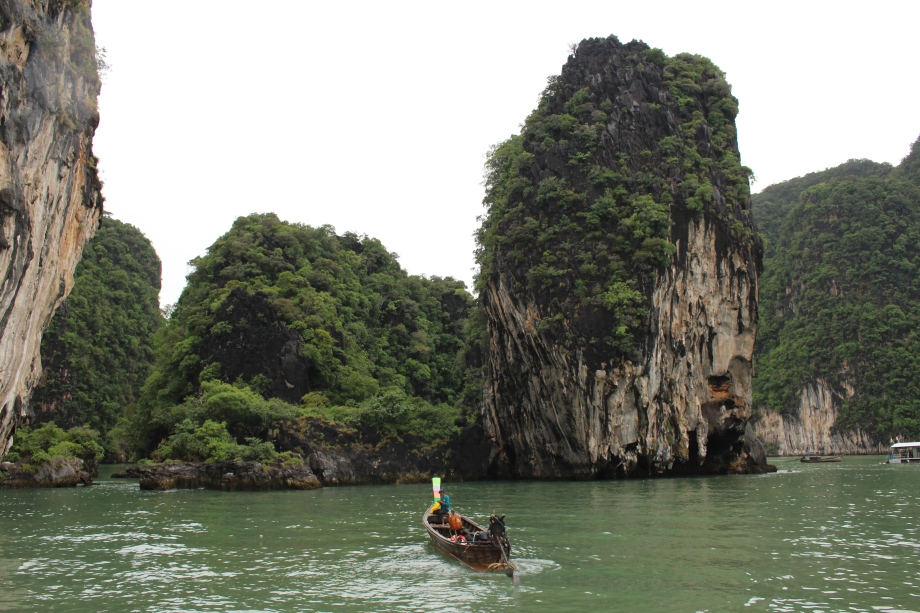 But the good weather was short lived, and not long after arriving to our first island with the option to chill out on the beach, kayak, or play in the water, the looming threat of dark grey skies in the distance moved in. The pleasant ocean breeze began to pick up speed as it incessantly whipped the palm trees back and fourth in a wind swept tango. I watched the crystal aquamarine colored ocean turn into a lusterless milky opaque shade of blue quartz, as the tides came rolling in higher waves than the one preceding it. A streak of lightning in the distance, then a rumble of thunder. Suddenly, the sky cracked open and cold rain drops fell, slowly at first, then pelting down like wet bullets, as shrieking beach bums scattered like ants to the nearest shelter. I wrestled with my damp towel, fighting against the wind as it flapped against my body covered in goosebumps while I ran. Guess the weather forecast was right after all. 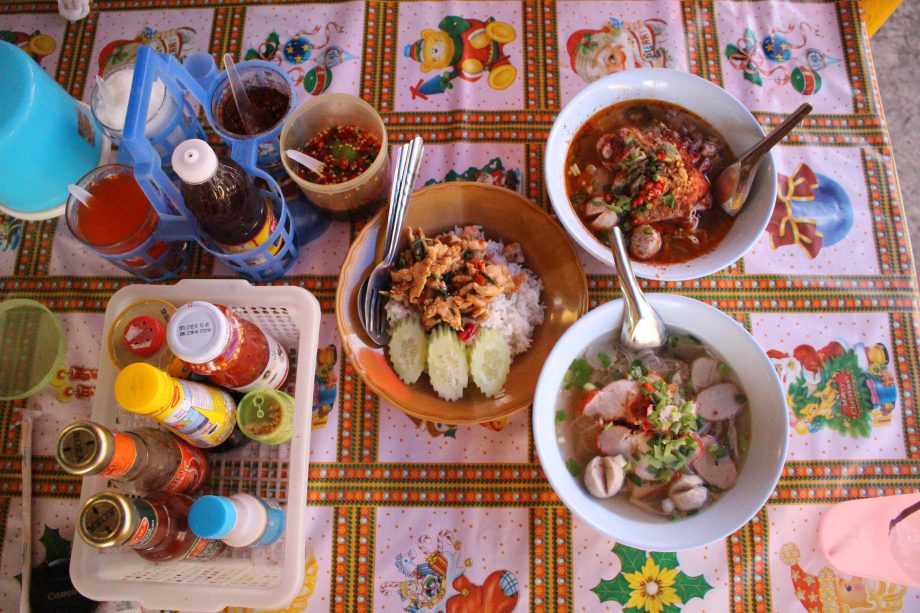 After an exciting excursion of thunderstorm-chasing-island-hopping fun, the next day we decided to become beach bums. The forecast predicted thunderstorms yet again, but we woke up to bright and sunny blue skies, with not an ominous grey cloud in sight. Guess the weather forecast wasn’t always right.

We filled up on a hearty brunch of noodle soups and a shared basil chicken stir fry from the food stall by our hotel, then set up shop on the rather empty beach just across the street. Our version of tanning always involves staying under the shade, and we found one lonely palm tree to provide it. The hilly spot provided a great vantage point for people and wave watching. The crashing waves seemed to climb incrementally higher and higher, eating away at the shoreline and available tanning space. Umbrellas and mats being rented for 100 baht per person had to be uprooted due to the impending tides. I was happy to find our shady spot, and we laid out our beach blankets side by side, weighing down the edges with our belongings. 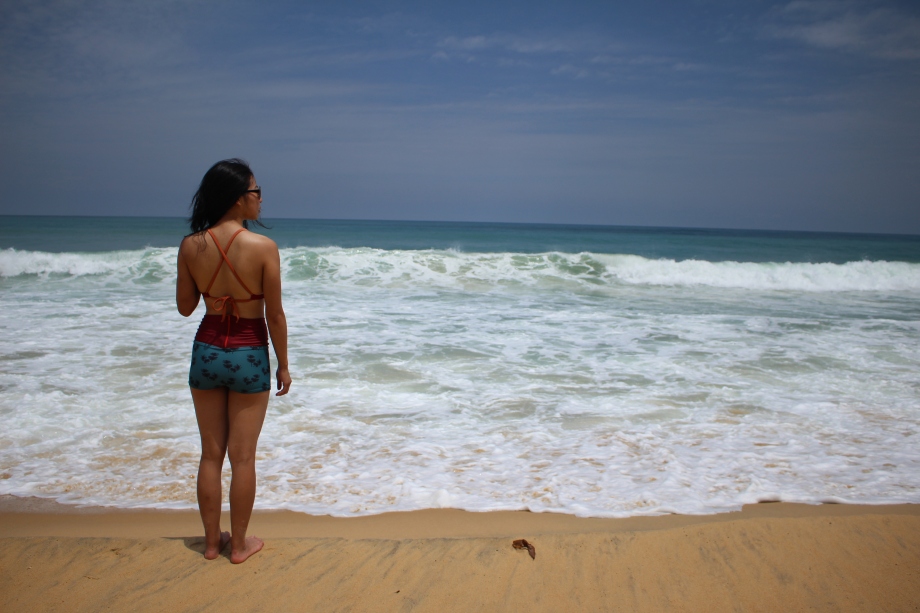 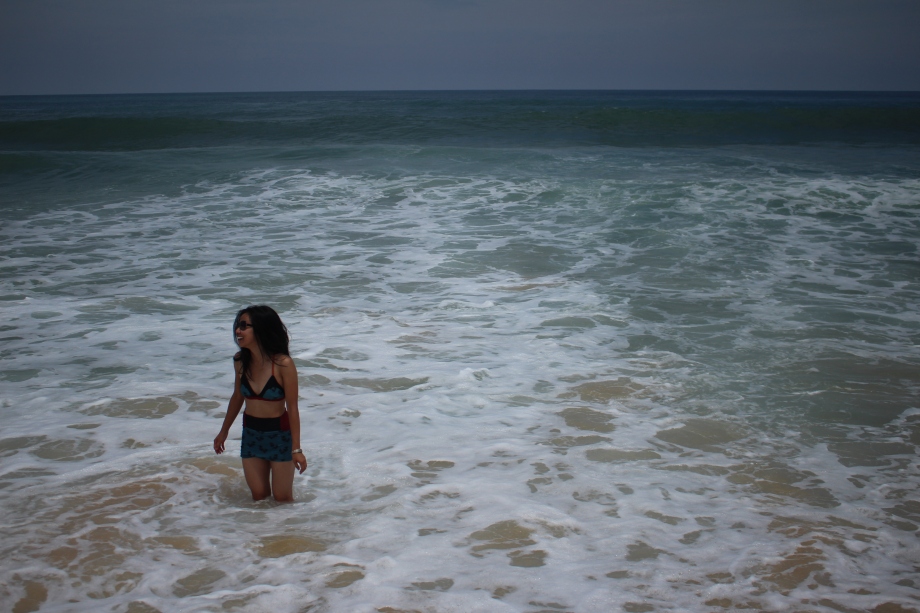 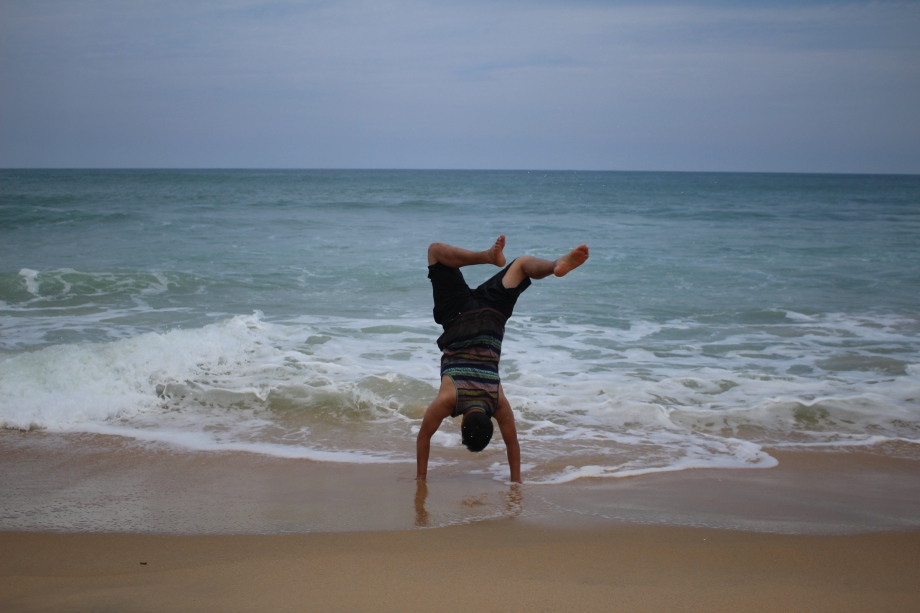 We ran into the crashing waves, holding hands like two teenagers in love, on a perpetually endless summer vacation. The cool water offered us respite from the heat, our tan bodies glistening in the sun. Simon being more brave than I, tumbled about in the water, frolicking like a little kid. He let the waves carry him and toss him around, and even attempted to do a hand stand before the waves slammed into the shore.

I on the other hand, didn’t venture in any deeper than my knees. There were signs posted along the beach warning of rip currents, and judging by the violent waves, I didn’t doubt it. Witnessing the strength of Mother Nature was one thing, but to feel her force crash into you and nearly drag you away is another. No matter how firmly I planted my feet into the wet sinking sand, the tumultuous waves always managed to knock me unsteady. It was both scary yet exhilarating.

We had to yell just to talk to each other, but the deafening roar of the waves drowned out our voices. If ever you have anything on your chest, a guilty conscious, a heavy heart, a restless mind, yell it out to the ocean, and let the waves wash those worries away. Any secrets confessed will remain between you and the sea, drifting to the bottom of the ocean floor forever.

I had assumed we wouldn’t last more than an hour “tanning” on the beach, but before we knew it, two hours passed, then three, and soon it was late into the afternoon already. We lay there on our towels under the protective shade and enjoyed the gentle sea breeze, letting our bodies dry, my skin smelling like salt water.

While Simon fell fast asleep, I watched the blue waves crest and fall, turning into a frothy white foam when they reached the shore, then disappearing into nothingness. Like words written in the sand, this moment too, would wash away forever. I reveled in the sounds – the rhythm of thunderous crash followed by a hissing fizz, when millions of foamy bubbles popped and sizzled as the waves retreated back into the ocean, a relaxing symphony orchestrated by the beach. I could listen eternally to the sounds of the ocean, hypnotized by the sight of the rolling blue waves against a perfect horizon. I let my thoughts drift out to sea.

Maybe I am a beach bum after all. 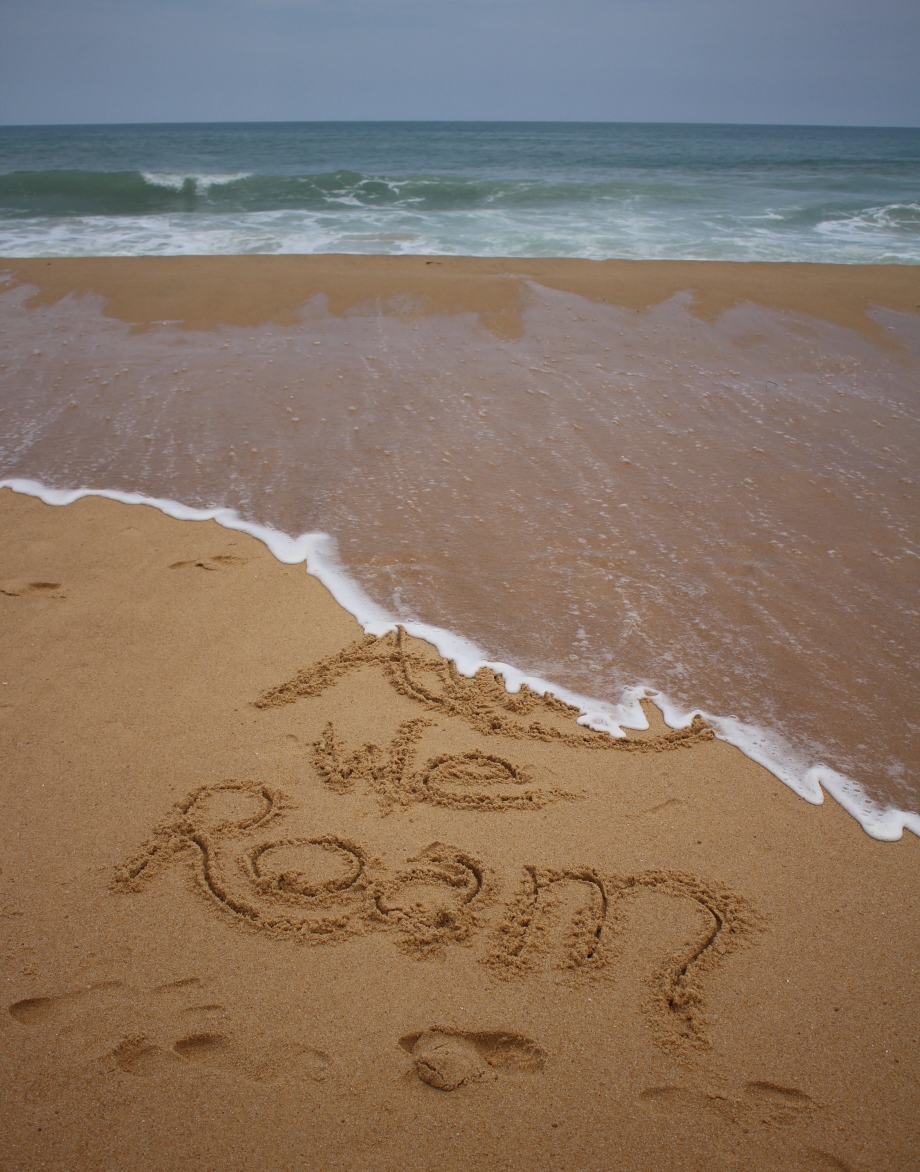 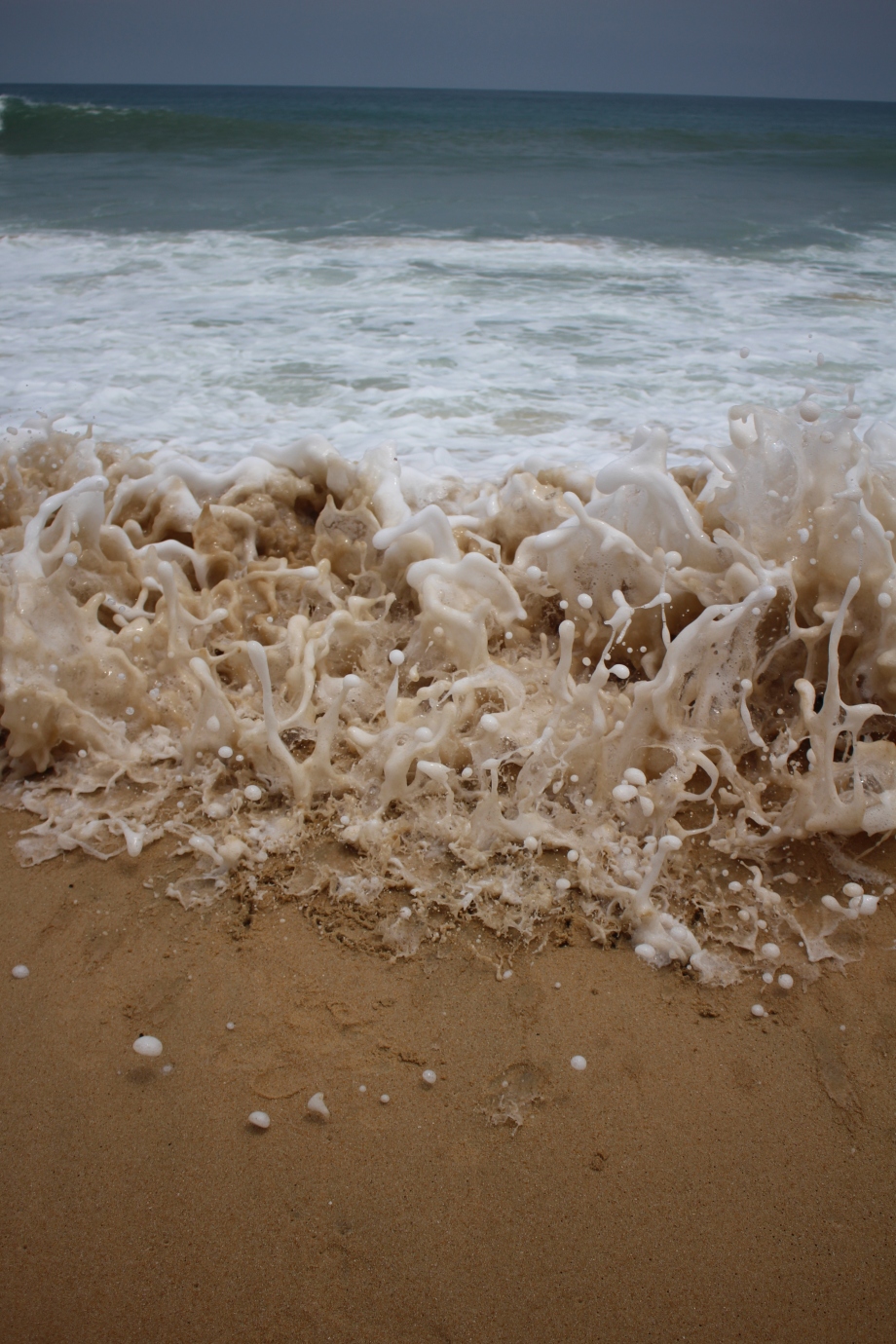